MVSA Architects set out to design a facade screen that would create a transparent veil between the UB and surrounding homes and, by doing this, protect the privacy of local residents. The facade screen also filters the light for students in the UB. The architect's design for the bronze-coloured screen was part of the permit application submitted to the municipality of Amsterdam. The idea is for the facade screen at the UB to create a timeless and iconic image that reflects both the UvA and the city of Amsterdam.

To decide which words or text to use and to develop the theme, the UvA created a working group consisting of experts from the UB, the Faculty of Humanities, the Student Council and the architect. It chose a sentence that links the UvA to the literary collection to be housed in the new UB. Taken from ‘Awater’, a poem by Martinus Nijhoff, the sentence is: ‘Read it, it doesn’t say what it says.’

The first part of this sentence is a nod to the UB as an institution with a book collection and 'reading room', while the second part of the sentence refers to the core task and activity of the Faculty of Humanities, being to interpret sources past and present and point out any polyvalence and ambiguity.

The architect worked with the type designer to incorporate the sentence - translated into the 24 languages and six scripts in which the UvA teaches - into the final design of the facade screen. Type designer Erik van Blokland has designed a beautiful font. Individual letters fall between the lines and the small difference between upper and lower case letters ensure the sentence is easy to read. Erik van Blokland entrusted this complicated assignment and the entire archive for the design process to the Allard Pierson museum and knowledge institute, which is part of the UB. Parallel to this design process, the contractor and the manufacturer worked with the architect to ensure the facade screen was actually possible to manufacture. The manufacturer supplied a mock-up (a model of part of the facade screen, based on the final design). The Spatial Quality Committee for the municipality of Amsterdam approved the mock-up and the final design.

A year of printing and coating

The manufacturer spent more than a year printing, coating and polishing the screen, the ultimate dimensions of which are 10 x 50 metres. The letters will be 3D-printed in plastic, after which a bronze coating will be applied. The screen facade will be finished such that any nuisance from birds is ruled out.

Getting results through collaboration

The unique facade screen will set the scene for the new UB and has only been possible because of the excellent collaboration between the architect, type designer, manufacturer and the UvA. Each of them drew on their own particular expertise to make a valuable contribution to the finished product. In the video, you will see the location of the facade screen, what the mock-up looks like and how it was manufactured. The architect, type designer and a professor from the UvA, who was also a member of the working group, all talk about their contribution to the facade screen. 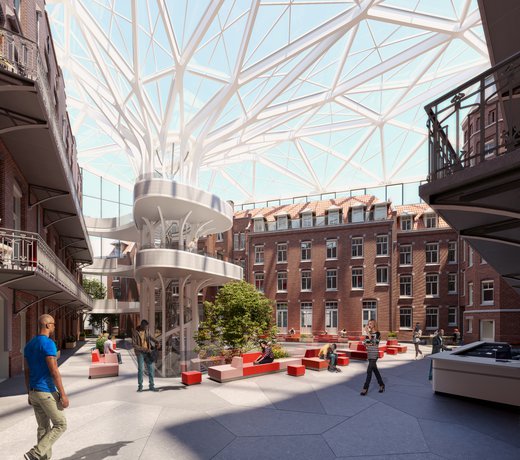