Construction of the 39.000 m2 tower has proceeded with exceptional speed. The contract was signed in March 2018 with groundbreaking on May 1st and the celebration of work starting at the end of May 2018; by September 18th, the building’s highest point of the core was reached. The building was delivered in November 2019, after a construction period of only 18 months.

Both the exterior and interior of the tower are suited to EMA’s scientific nature: the building is quiet and sober, with a regular and rational profile. A simple geometry forms the facade and clearly defines the 19-floor structure. Inside, about 27.500 m2 of the total floor area is assigned to office functions.

Most of this space is open plan, although every floor also has its own individual workspaces and quiet spaces. Around 11.500 m2 of space is intended for meeting and conference rooms, accessed via an open, light-filled atrium, as well as a lobby and restaurant.

CGREA awarded the project to Dura Vermeer, on the basis of design-build-maintain (DBM). Immediately after being awarded the contract, Dura Vermeer signed an agreement with Heijmans and the two formed the construction consortium EMA.

Within the DBM project structure, MVSA was responsible for further developing the preliminary design by Fokke van Dijk. Landscape architects OKRA have designed the building’s surroundings on site and its roof garden. Fokkema & Partners have tackled the interior, DWA was the installation advisor and DGMR was consulting on building physics and fire safety. Van Rossum has joined the team as a construction designer.

After delivery, the EMA building will be maintained for the next 20 years by Domenico Scarlatti, consisting of Heijmans and Van Dorp.

Because of the exceptional speed with which the building had to be realized, construction focused on building as quickly as possible. This was the reason why prefabricated elements were used, since these are dimensionally stable, weather-independent and readily available at the construction site. The speed of building was high, yet all techniques that were used are proven techniques.

For the main construction, the choice fell on a steel skeleton that, according to CGREA, can be “assembled as quickly as Lego”. An in situ poured concrete core gives the tower its stability. In order to minimize hoisting, sliding formwork was used in preference to climbing formwork or building with prefab concrete parts. The mounting of the facade elements was done from the storey floors, dispensing with the need for scaffolding.

Huge time savings have also been achieved in the programming and design phases. For example, CGREA already started with the preliminary design before it was known that the lottery in Brussels was heading in our direction and the arrival of EMA in Amsterdam became a certainty. Immediately after the award, scrum sessions were held to ensure the smooth translation of the requirements in the preliminary design and also to help reduce discussion and time loss in the extended design process. Through a phased acceptance of the verification plans, it has been possible to place orders for materials and equipment earlier than would otherwise be possible, meaning an all-important earlier start on the structural work.

Nest boxes in the façade and an insect hotel in the roof garden offer nature a helping hand and enable the building to make a positive contribution to the surrounding ecosystem.

Other sustainable measures are the underground storage of rainwater for reuse in the building and a large bicycle parking which, together with many public transport facilities in the immediate vicinity, will encourage the building users to leave their cars at home.

The project has obtained the BREEAM ‘Excellent’ design certificate, as well as the Nearly Zero-Energy Building (BENG) certification. To achieve these ambitious sustainability goals, 50% of the energy requirement will be generated via renewables, namely PV panels. 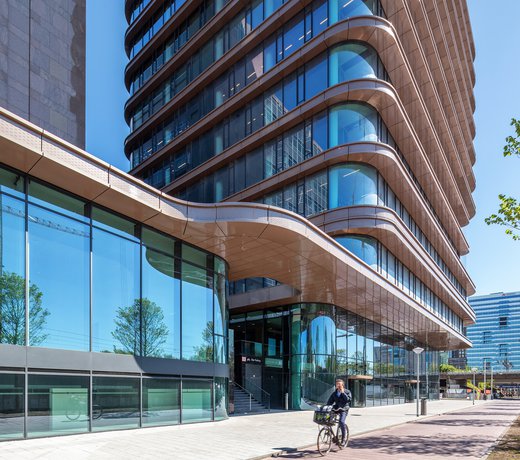