WTC Utrecht is officially opened on Wednesday. The building designed by MVSA Architects on the Jaarbeursplein in the Dom city comprises 29,000 square meters of office space. There are also facilities such as a bicycle shed, catering and a conference center.

The building is located in a busy location on a compact plot next to the central station and just in front of the municipal office. To reflect the dynamics of the passenger flows all around, the building has rounded corners.

In order to strengthen the relationship with the environment, the building is highly transparent and entrances have been realized on two levels (on the Jaarbeursplein and at the top of the stairs). The nine hundred bicycle parking spaces are connected to that of the central station, creating the largest bicycle parking facility in Europe.

Like the lobby and other public and communal facilities for users, the bicycle shed is housed in the four-storey 'plinth' of the building. The offices are housed on the remaining floors above. The office floors are designed for different types of users, from start-ups to established companies.

The facade has a horizontal articulation, with balustrades and glass sections of subtly varying height. Each floor has at least one balcony, which is located in one of the sunken parts of the facade. The facade has been designed in such a way that no separate solar shading is required in the building, which contributes to the sustainability of the WTC.

WTC Utrecht has received a BREEAM Excellent and (the first building in the Netherlands) a WELL Building Standard certification for sustainability. The measures that contribute to this include the roof completely covered with solar panels, but also the high degree of flexibility. For example, the office floors can be easily divided into six office units, which in turn could eventually be transformed into apartments. 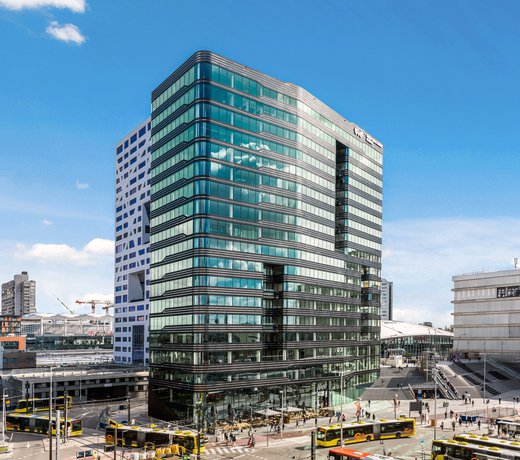