Networked to the max

NCIA is the ICT services provider and communications supporter of NATO. The agency is all about hardware and software. It builds part of the hardware itself, and ensures delivery of ready-to-use systems to clients. It trains future users and lends remote support in the form of help desks. In addition, it provides services in the field of telephony and satellite communications. Finally, NCIA develops, realizes and tests systems, often in the form of modelling and computer simulation. All of this means that NCIA a major consumer of ICT networks and systems. Nevertheless, we avoided a sterile, high-tech look for one that emphasizes light, greenery and interaction - a humanized take on networks and communication.

The agency had run out of space in its existing 13,500 m² building in The Hague, which was also in need of a radical renovation. Our design adds one extra floor as well as an entirely new section at the front of the facility. The additions almost double the existing floorspace with an extra 11,000 m². At the same time, the site has been expanded and more parking spaces were added.

MVSA Architects was responsible for both the exterior and the interior of the project, building on the draft design of the Dutch Rijksvastgoedbedrijf (the Central Government Real Estate Agency). Liaising closely with the Rijksvastgoedbedrijf architects, MVSA achieved an ambitious architectural level.

While the renovation will add freshness to the facades, roofs, building installations and furnishings, the extension will give the building an entirely new and high-level image, befitting a player on the international stage. The new construction includes the two lofty, light-filled atria housing the entrance and restaurant, plus a conference centre and sports facilities in the basement. A transparent glass construction wraps the roofs and atrium facades to a spectacular effect.

The project called for a high-profile look, reflecting the status of NATO and the international standing of the Netherlands. This was achieved by making the tops of the atria completely transparent, to the extent of using glass beams to support the glass rooftops. Lucid and luminous, the beautiful, barely-there design draws the eye and frames unbroken views of the sky, while flooding the space with daylight. Flawless detailing throughout adds to the perception of quality. In the interior, colour adds impact and warmth. As a final Dutch touch, images from the Dutch masters have been incorporated into the wall finishes and carpets.

Given the work of the NCIA and the sensitivity of the information it handles, optimal security is essential. In realizing this aspect of the design, we were able to draw on our previous projects for the Ministries of Defence and Finance, which have similarly stringent requirements.

The NCIA is divided into transparent public areas and more closed secure zones. The public spaces are the atria and the entrance areas. Beyond these, security zoning is structured into five zones, arranged as concentric rings throughout the building. Other essential aspects were ICT security and acoustics. To ensure optimum performance in these, specialist advisers were added to the team at an early stage.

The extremely tight schedule was based on design & build. MVSA Architects worked out an innovative Big BIM model with the partners. 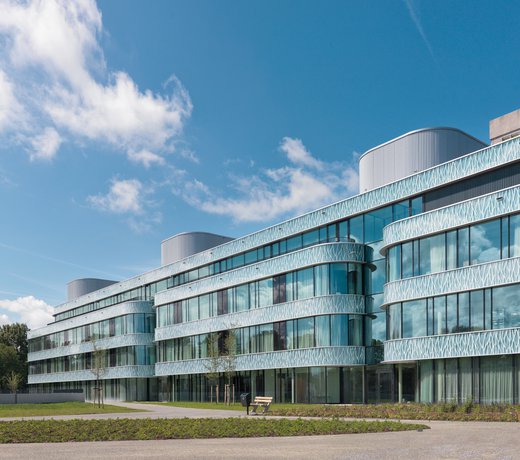