As the centre of Amsterdam is a Unesco World Heritage listed site, these densifying new developments are being concentrated in formerly suburban areas on the outskirts of the city. Notably in the sprawling area of Amsterdam Nieuw-West, which dates from the period of expansion following the Second World War. Most buildings here were built after 1950, along the lines of a masterplan by Van Eesteren (the Algemeen Uitbreidingsplan van Amsterdam) that was based on the garden city concept.

Currently, Amsterdam Nieuw-West is undergoing a rapid renewal process, with a large-scale redevelopment scheme that includes partial demolition, (high-rise) new builds and substantial renovation. As part of this ongoing makeover, MVSA was asked to design a new high-density, mid-market rental apartment building in the Reinier Engelmanstraat near Lelylaan station, on the site of a former postal sorting office.

Connecting with the context

The location of the new apartment building, called Citadel, is in the ‘Blue Band village’ neighbourhood, directly opposite the famous complex of ‘sawtooth houses’ by prominent post-war architect Frans van Gool. Built in 1959, the blocks of single-family houses have an experimental floor plan that means their façades form a zigzag line, creating a sawtooth pattern. It was the blue mouldings on their roofs that gave the neighbourhood its Blue Band nickname, after the packaging of the Dutch margarine brand.

With the whole Blue Band village a protected monument since 2008, our design for the new build set out to respect its context, while adding a contemporary twist to the neighbourhood. Rather than attempting a high-rise building, which would have sat awkwardly here, we opted for a mid-rise development that would not dwarf the existing housing. We also responded to the sawtooth theme with a striking façade of zigzagging white balconies for our apartment building. These form a dynamic rippling wave as they progress over its face.

Our design repeats the rectangular profile of the former sorting office but punctures it with three patios. These allow the development to breathe: ample daylight enters the building and there is outdoors access to the apartments via the courtyard and galleries on the floor above. Clustered around the patios are 149 compact starter apartments. There are several different types, all in the range of 40m2 to 65m2, carefully placed over four floors to achieve maximum spatial efficiency. Underneath the apartments, a basement parking garage has space for 60 vehicles.

At ground level, the apartments are raised by 1m from the street. This solution provides lively street views for residents, while simultaneously reducing the views into their apartments. This arrangement also gave us the opportunity to create a zone for street life, with benches and small planted areas, which add liveliness and places to sit to the neighbourhood, again firmly rooting the building in its context.

The highly rational organisation of the interior space allowed us to generate the budget to create the bold façade design. After being designed on a computer, the complex façade design was tried out as a 3D model. The design was finally executed in white concrete (made extra dazzling with the addition of titanium dioxide) with twisting steel railings. Behind these white balconies – which are unusually generous for this housing type – the window frames and fibre-concrete wall panels are black and dark grey, making a dramatic contrast.

Inside the building, there’s a change in materiality, with lots of wood adding a homely warmth to the interior patio spaces. The apartments feature sleek and simple interiors with floor-to-ceiling windows for light and views. At roof level, apartments alternate with outside areas that are sedum-covered for optimal rainwater buffering. On top of this top layer, PV panels help keep the energy footprint of the building low. In this way too, the new high-density building meets present and future needs, while its architecture celebrates the historic identity of the neighbourhood. 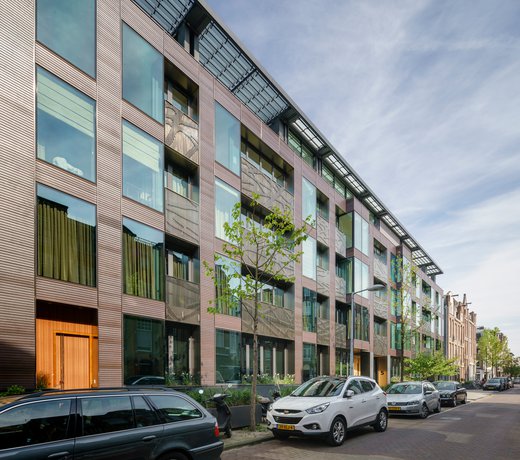